The Story of Us... My Fairy Tale 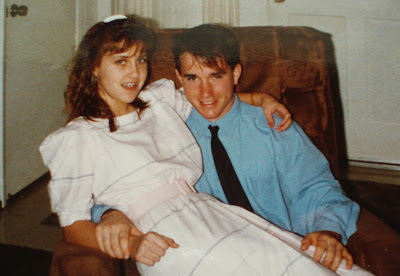 It was the summer of 1988, my friend Nicole told me about this greatest guy… Michael, he was a senior T.A. in her freshman drama class. She said, he has never done drugs, he doesn’t drink, he LOVES all things Disneyland and Mickey Mouse related, and he is the world’s biggest Michael Jackson fan… That was the only information I was given and at that very moment, I knew THIS was the boy I was going to marry… I told Nicole she HAD to introduce me to him, I might have begged?? It never happened… All the while my very thoughts and prayers were about Michael. Finally in the spring of 1989 Nicole came through and introduced to me to my dream guy… Although I was a bit embarrassed as I didn’t know it was going to happen after science class and the folder I was carrying had in bold permanent marker. I Love Michael all over it… He walked me to my next class. I gave him my phone number and that evening he called me!

We talked for a couple hours, getting to know each other… Remember I already knew I loved him and this conversation just confirmed it… Next step convince my parents that this “older” guy was meant to be for me… He was the one they had me pray for as a little girl, I was taught to pray for my future husband because though I didn’t know who he was; the Lord already had him picked out and waiting for me. We decided on the following Sunday he would come to church with us and then come over for lunch afterwards… Funny thing is he went to the church we went to only not the same service; I had no idea, just of the many things I learned over our long phone conversations.

After church he came back to our house and we discovered him and my dad had a lot of the same likes and phobia {shots}… Needless to say my parents fell in love with him the day they met him. I was beyond thrilled.

Every day he walked me to class and it was in the home ec. hallway before my sewing class he hugged and kissed me on the cheek… I floated into class that day hand on cheek as if to hold that special kiss in place forever. In fact the four classmates in my group asked me why I was glowing?! I remember nothing of class that day, only that I couldn’t wait for him to call me that night… I think it was that night I he told me he actually walked to Burger King over 2 miles away and passing my house to call me… They didn’t have a home phone… I was so touched and felt incredibly honored and guilty that he would do such a thing…

Posted by Jen~ Lipstick and Laundry at 4:27 AM

This is so romantic! Oh my goodness! I love hearing your Love Story, Jen!:) Lori

Such a darling picture, too!!!

Truly a precious story Jen, Spike is such a sweetie, especially for walking over 2 miles to call you. That picture of y'all...never would have guessed that was Spike. So fun to see "young" pics of y'all!!
Elise

Jen~ Lipstick and Laundry
Hi there my name is Jen, I am a stay at home mom to 4 yes Four boys! Ranging in ages 19 to 10. I have been madly, happily, blissfully married to the LOVE of my life for 23 years! I live my DREAM every day of my life. I knew at about 5 years old I wanted to be happily married and have lots of babies to stay home and raise. I love the LORD and faithfully find ways to serve HIM and others. My favorite things include, my BiBlE, reading, my CaMeRa, brownies, cHoCoLaTe ChIp CoOkIeS, peanut butter M&M's, STARBUCKS frappes, MaKe Up, especailly LiPsTiCk, BiG ChUnKy FuNkY necklaces, PuRsEs ALL things crafty... PaPeR, FaBrIc, GlUe, PaInt, SpRaY paint, polka dots, Tassels, nEsTs, FraMes, MiLk GlAsS, SiLvEr, ALL things vIntaGe... If I think of anything else I'll let you know!

I Was Featured On...